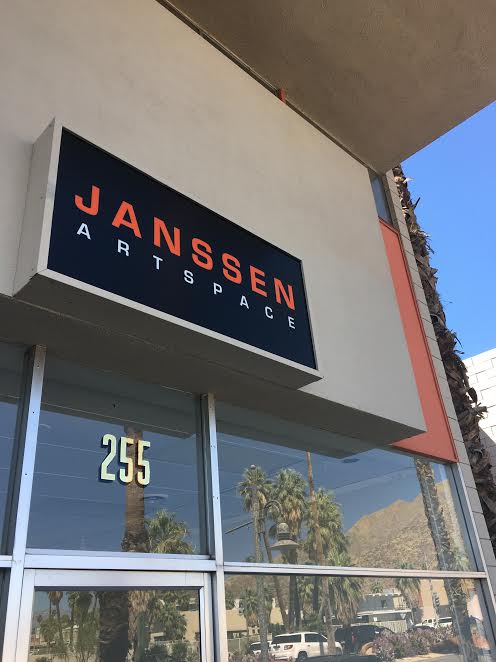 May 2017 marks the return of the popular and innovative art gallery that once held some of the desert’s finest art exhibits. Artist and gallery owner, Steven Janssen originally opened the doors to Janssen Artspace in 2006 to a large crowd during the Easter Holiday Weekend. Eleven years after the original opening, Janssen Artspace has been reborn into a new location in the heart of downtown Palm Springs on East Tahquitz Canyon Way.

In its first incarnation the gallery hosted numerous exhibits and art events featuring some of the most talented painters, sculptors and photographers, emerging and established.

In 2010, due to a failing economy, Janssen Artspace was forced to close its doors. “So many small businesses had to close during that time and as a resident of Palm Springs it was a difficult time to endure,” Janssen adds. Following the closure of the gallery, Janssen took the business mobile, producing one-night pop up exhibits and arthouses throughout Southern California. He moved his work studio to downtown Los Angeles and exhibited his work at Gloria Delson Contemporary Art gallery in downtown L.A. and landed a solo exhibit at the prestigious De Re Gallery in West Hollywood, Ca. The longing to be a gallerist, curator and business owner again never wavered. The much improved economy in Palm Springs inspired him to pursue a new gallery and to again create his art in the desert. “To be and artist in the desert is a beautiful thing” he add, “There is such a connection between the soul and nature here that you can’t find anywhere else.”

With careful planning and research, Janssen sought out the perfect space to relaunch Janssen Artspace in the heart of downtown Palm Springs. The new space is open, airy with an abundance of artistic energy. In addition to showcasing Janssen’s and many other artists works, the new space will also serve as his studio where he can perform live painting and drawing demonstrations to the public.” Along with exhibiting fine art pieces on the main gallery floor, Janssen launched ArtBox Gallery in 2018, which is basically a gallery inside of a gallery. He took his storage room and converted it into an entirely separate gallery space where guests can interact with the art on a more intimate level. Gallery goers are able to thumb through entire inventories of gallery artists work as well.