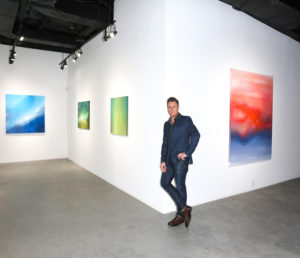 A native Angelino, Steven Janssen has been painting since the young age of 4. Throughout his elementary and high school years he won numerous awards for student exhibitions. His first formal group showing was at the Otis Parson School of Design (now known as Parsons School of Design). Janssen attended California State University at Long Beach where he studied life drawing and painting. After leaving college he began working for a small production company in the art department. While there he learned the craft of scenic painting and prop making on productions for Showtime, TLC, ABC and The Golden Globes telecast.

Drawn back to the canvas, Janssen befriended a small network of painters that served to inspire him. Upon observing their individual dedication and personal styles, Janssen soon developed his own. Combining the human form with organic abstract movement with a hint of eroticism soon became his signature style. Numerous gallery exhibits followed, gaining collectors over the years which eventually led him to open his own gallery in downtown Palm Srings in 2006. The gallery, JANSSENARTSPACE, enjoyed some of the most innovative exhibits in the desert, featuring art from some of the most talented painters, sculptors and photographers in Southern California. Janssen closed the gallery in 2009 due to a downturn in the economy and a desire to move back to Los Angeles. JANSSENARTSPACE as a concept continued for 5 years but in the form of mobile gallery exhibits and pop up art events.

In the following years, Janssen focused solely on his art and found the perfect art studio in the heart of downtown Los Angeles. His work was featured in Architectural Digest and House Beautiful magazines. Working as an artist, he was involved in many group exhibitions and Gloria Delson Contemporary Art and landed a solo exhibition at De Re Gallery in West Hollywood.

But the longing to be a gallerist again returned and never wavered. As 2017 approached and as the tourism in Palm Springs reached an all time high, he carefully sought out the perfect space to relaunch Janssen Artspace and soon found himself immersed in all the elements he missed….the desert, being a curator and business.

The new space is open and airy and located in the heart of downtown Palm Springs. “Opening the gallery will be a fantastic way to bring the two art communities of Los Angeles and Palm Springs together.” Janssen Artspace opens to the public in May 2017.